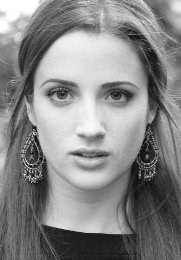 艾米丽邓恩，Emily grew up in Utah, the youngest of six children. She has always been involved in the arts. She began dancing at age three, drawing at age 4, singing and acting at age 8...anything to do with art, she loved! She started studying ballroom dancing at age 12. Emily earned a position on the Young Ambassadors, an international performing group for Brigham Young University. She traveled across the United States and also to Brazil and Argentina performing a show called, "Broadway Rhythm". She also shot her feature film debut as Trisha in Napoleon Dynamite (2004). Emily graduated in April, 2005 from Brigham Young University with a Bachelor of Fine Arts in illustration. She worked for Avalanche Software of Disney making video games, managing artists, drawing concept art and building 3D models for 10.5 years. Emily is now married to Adam Dunn. She has two children, a boy and a girl, Thomas and Maggie.