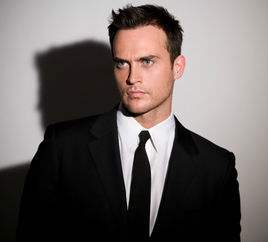 夏恩·杰克逊，Cheyenne Jackson (born July 12, 1975) is an American actor and singer.[2] He started in regional theater when he moved to Seattle, and after moving to New York City, made his 2002 Broadway theatre debut understudying both male leads in the Tony Award-winning musical Thoroughly Modern Millie. In 2005, he originated his first Broadway leading role in All Shook Up earning him a Theatre World Award for "Outstanding Broadway Debut". In films, Jackson portrayed 9/11 victim and hero Mark Bingham in the 2006 Academy Award nominated United 93 which earned him the Boston Society of Film Critics 2006 award for "Best Ensemble Cast". He has also appeared in the films Curiosity and Hysteria. On television, he is a recurring series regular on NBC's 30 Rock, portraying Jack/Danny Baker. He also guest starred on several series including; Lipstick Jungle, Life on Mars, and Ugly Betty. In 2008, Jackson was cast as the series lead Sebastian Kinglare, and filmed the Lifetime Television pilot Family Practice opposite Anne Archer and Beau Bridges.[3] The series was not picked up for distribution.[4] Jackson has starred in several notable webisode series and in 2009 starred in a sold out one man show, "Back to the Start."[4] In 2008, he was named Out magazine's Entertainer of the year. He is an international ambassador for amfAR (The Foundation for AIDS Research)[5] and a national ambassador and spokesperson for The Hetrick-Martin Institute.[6] Early life Jackson was born in Idaho and was named by his father after the 1950s Western series.[4] The third of four children, he was raised along a "teeny mill town" of about 1,200 people in a rural area on the Washington-Idaho border.[4] His father is a Native American and a Vietnam veteran. His mom taught Jackson, his sister and two brothers to sing and regularly played music from Joan Baez, Joni Mitchell, Bob Dylan and Elvis. His parents were evangelical born-again Christians and this caused tension when he came out to them as gay at 19 after h