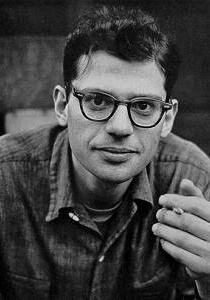 艾伦·金斯堡，Irwin Allen Ginsberg (pronounced /ˈɡɪnzbərɡ/; June 3, 1926 – April 5, 1997) was an American poet who vigorously opposed militarism, materialism and sexual repression. In the 1950s, Ginsberg was a leading figure of the Beat Generation, an anarchic group of young men and women who joined poetry, song, sex, wine and illicit drugs with passionate political ideas that championed personal freedoms.[1] Ginsberg's epic poem "Howl", in which he celebrates his fellow "angel-headed hipsters" and excoriates what he saw as the destructive forces of capitalism and conformity in the United States, is one of the classic poems of the Beat Generation [2] The poem, dedicated to writer Carl Solomon, has the opening: I saw the best minds of my generation destroyed by madness, starving hysterical naked, dragging themselves through the negro streets at dawn looking for an angry fix...[3] In October 1955, Ginsberg and five other unknown poets gave a free reading at an experimental art gallery in San Francisco. Ginsberg's "Howl" electrified the audience. According to fellow poet Michael McClure, it was clear "that a barrier had been broken, that a human voice and body had been hurled against the harsh wall of America and its supporting armies and navies and academies and institutions and ownership systems and power support bases."[4] In 1957, "Howl" attracted widespread publicity when it became the subject of an obscenity trial in which a San Francisco prosecutor argued it contained "filthy, vulgar, obscene, and disgusting language." The poem seemed especially outrageous in 1950s America because it depicted both heterosexual and homosexual sex[5] at a time when sodomy laws made homosexual acts a crime in every U.S. state. "Howl" reflected Ginsberg's own bisexuality and his homosexual relationships with a number of men, including Peter Orlovsky, his lifelong partner.[6] Judge Clayton W. Horn ruled that "Howl" was not obscene, adding, "Would there be any freedom of press or speech if one must