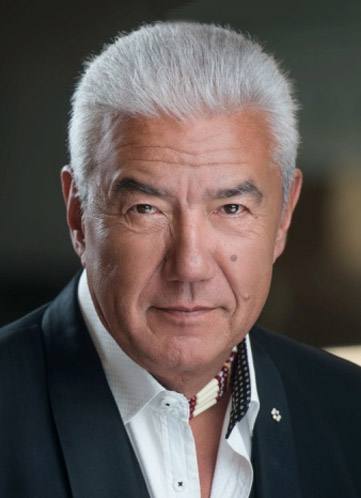 汤姆·杰克逊，One of Canada's most popular actors and country folk singers, Jackson is also well known as an entrepreneur. He was born to Rose, a Cree mother and Marshall, an English father on the One Arrow Reserve in Saskatchewan, Canada. His family moved to Namao, Alberta when he was seven years old. He moved with his family to Winnipeg, Manitoba at age fourteen. A year later, Jackson dropped out of high school taking a life on the streets for seven years. From these humble beginnings, he rose to become one of Canada's favorite and most honoured First Nations performers. Jackson founded the annual Huron Carole fund-raising concerts in 1987 in order to support the Salvation Army. His most notable television appearances were on Shining Time Station (1989) as Billy Twofeathers and North of 60 (1992) as Peter Kenidi. In January 2000, he was named to the Order of Canada, that country's highest civilian award. Jackson was the Chancellor of Trent University from 2009 to 2013.