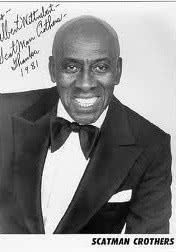 斯加特曼·克罗索斯，可能人们更多认识他是从他出现在电影闪灵里的男配角。他还曾在影片飞越疯人院里饰演夜间看守，再度与杰克尼尔克森演对手戏。 Though many people probably remember him for an appearance in the film The Shining or for his role as Louie in Chico and the Man during the '70s, Scatman Crothers had an extensive jazz and later R&B background. He performed in many clubs and on radio shows in the '20s,'30s, and '40s before making the move to television in 1948. But once he moved to acting, Crothers stayed busy the remainder of his life. He had roles in such series as The Governor and J.J., Kojak, Toma, and One of the Boys. He was also active as a voice for such cartoon series as Hong Kong Phooey and The Harlem Globetrotters. ~ Ron Wynn, Rovi