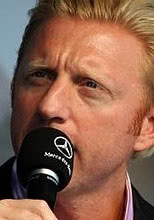 鲍里斯·贝克尔，Boris Franz Becker (German pronunciation: [ˈboːʁɪs ˈbɛkɐ]; born 22 November 1967) is a German former world No. 1 professional tennis player. He was successful from the start of his career, winning the first of his six major singles titles at age 17. His Grand Slam singles titles included three Wimbledons, two Australian Opens and one US Open. He also won three year-end championships, 13 Masters Series titles and an Olympic gold medal in doubles. In 1989, he was voted the Player of the Year by both the ATP and the ITF. At times Becker struggled with his early success and fame, and his personal life has been turbulent. Since his playing career ended, he has engaged in numerous ventures, including coaching Novak Djokovic for three years, and working in the field of poker.[2]